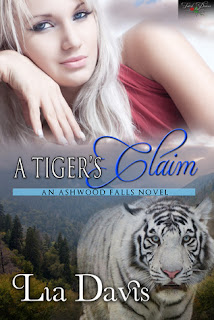 Blurb: As the Alpha's only daughter Shayna Andrews has always been treated like a rare gem, protected like royalty, and she's suffocating. Her longing to be independent has driven her to sneak out one evening after dinner. After relishing in being able to run free without an escort, she finds herself face-to-face with the enemy, miles from home, and nearly loses her life until a lone wolf comes to her aid.


Travis Hunter's main objective is to destroy the Onyx Pack--a group of drug using, murdering rogue shifters. His seek-and-destroy plans are put on hold when he rescues a female from a brutal attack. The beautifully exotic tiger shifter, Shayna, stirs a passion he thought died with his long-lost mate.

When Shay's first heat cycle slams into her, Travis has no choice but to submit to her needs--and his own. But there is always a price to sleeping with the Pack princess. Not only will they have to face her Pack, Shay and Travis will have to deal with a mating that is beyond a single night and could have consequences more than either of them had thought. And when Travis finds out Shay wears the enemy's brand, things will go from bad to worse.

Warning: One alpha female who doesn't take no for an answer, a wolf with more on the line than just his heart, and a combustible attraction that's sure to cause more than one sweaty night.

REVIEW:Tiger's Claim is a promising series with action, adventure, romance, and of course, sex!

We meet Shayna Andrews, who is a tiger shifter that is feeling stifled by her family and decides to escape in the woods for awhile by herself. Unfortunately, her rebellion comes with disastrous results in more ways than one. First, she is attacked by some rogue shifters, only to be saved by an alpha male wolf shifter. Once her saviour, Travis Hunter, takes her to safety another hurdle is thrown their way. Shay ends up going into her first heat, which will lead to life changing consequences for both her and Travis. Many things are revealed between the two shifters, and even though some of the revelations are not positive ones their attraction continues to grow for one another. Will they be able to over come some of the road blocks, and what will happen when Shay goes back to her family with a new mate?

Lia Davis does a wonderful job of setting up a series that has great characters and plenty of evolving story lines. My biggest complaint with this story was that it felt somewhat rushed. I would have loved to have been able to get to know the characters more in depth, as well as have some more information on the rogue shifters, and what happens to them after Travis deals with them. There were also several editing issues, mainly minor spelling errors, that was somewhat distracting at times for me. On the whole it is a great series, and I do hope that with future books there may be a chance to have a longer story so that I can become fully absorbed into what could be a very intriguing world.