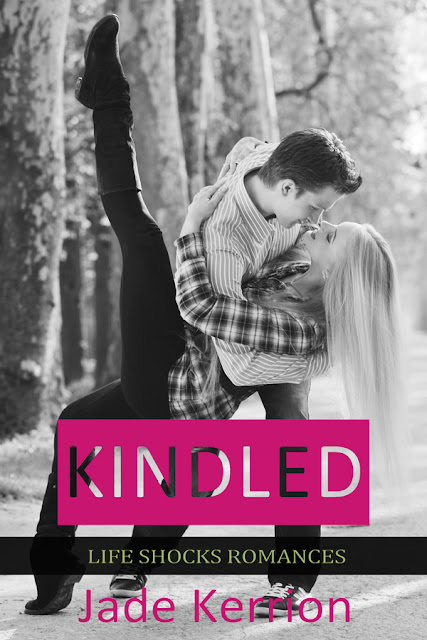 Christmas Pets & Kisses 2 is coming October 11th, and I'll be spotlighting the first chapters of the books featured in the set! Today's sneak peek is Kindled, by Jade Kerrion.

Preorder your copy of Christmas pets and Kisses 2 for 99 cents. 12 stories, one low price. All new sweet Christmas romances!

Nicholas Dragov, a principal dancer with the American Ballet Theatre, is the bad boy of ballet. On stage, his grand jeté defies the laws of physics and gravity. Off stage, he lavishes money on fast cars and fast women. His small-town roots are abandoned in the past, until a career-ending injury traps him back home, in the care of the woman who broke his heart.
Marisa Chantilly was Nicholas’s first dance partner, but he alone made it onto the world stage. In the eight years since they have seen each other, she has married, become pregnant, a widow, and a mother. Now, Nicholas is home, his beautiful body broken, and his attitude darker and deeper than a volcanic crater. A massage therapist, she knows how to work with sports injuries, but no amount of training or professionalism can help her endure the man who abandoned her when she needed him most.

Motorcycle headlights rippled through the night, turning the water droplets silver and the field of gravestones ghostly white. Nicholas Dragov swung his leg over the motorcycle. He was reaching for his helmet when motion flickered at the corner of his eye. He turned and scrutinized the graveyard, but he saw nothing out of the ordinary.

He scowled. Of course nothing was out of the ordinary. No other sane person would be out here in this weather, at this time of the night, on Thanksgiving. He shouldn’t have been out here either, not when his parents were at home, working their way through the second round of their Thanksgiving feast.

His glance fell on a particular gravestone framed by fresh flowers. Be seeing you around, buddy.
The distinctive roar of his Harley Davidson engine coming to life cut through the soft patter of rain. With easy expertise, he turned his motorcycle onto the narrow road leading from Westchester Cemetery. He could make it back to his Manhattan apartment in a little over an hour, in time for a good night’s rest and the 8 a.m. master class tomorrow. He had only stretched for two hours in the morning, and his muscles felt tight from not dancing that day. He would pay for it in class tomorrow. If he did not dance for two days, his partner would notice. Three days, and the audience would. Ballet was the least forgiving of the arts, and a host of talented soloists eagerly waited in the wings to claim his position as principal dancer at the American Ballet Theatre.

He could not slack.

The familiar roar of the Harley’s engine kept him company through winding roads pockmarked by the light of occasional streetlamps. Westchester was no longer home, but he still knew his way around. Eight years earlier, he had turned his back on family and friends and fled to New York City. The eternal bustle of Manhattan kept the loneliness at bay. The punishing and unrelenting schedule of classes, rehearsals, and performances kept him from dwelling on his loss.

He had a new life, and it was a great life. Everyone said so. Obviously—his mouth twisted into an ironic grimace—they must be right.

An image of a whitewashed house tucked in a corner of a small Westchester neighborhood flashed through his mind. The neatly mowed lawn and freshly planted flowerbeds. The brown picket fence and the black Labrador reclined on the front porch, pink tongue lolling in a half-grin. The gabled red-tiled roof and a slim, feminine shadow at the window, looking out at him.

With effort, he wrenched his thoughts away from the memory. His throat tightened. Hallucination. She’s never stood at the window looking out at me. Anyway, it’s all in the past.

The headlights of passing cars whizzed by him. Rain pelted down, but traffic filled the narrow streets. Nothing as mundane as a thunderstorm could dampen the enthusiasm of pre-Black Friday sales. His motorcycle, however, allowed him to cut through the blockade of vehicles lined up to turn in at the mall.

He was on the outskirts of Westchester when something large and black darted across the street. A curse tore from his lips as he swerved to avoid a crash. His motorcycle wheels spun, but failed to grip the road, and the machine crashed to the ground, sliding across the street. Sparks skittered as steel grated against asphalt. Nicholas tumbled from his bike; momentum sent him skidding over the street. White-hot shards of pain tore through his back, burning through the leather of his black motorcycle jacket.

Wheels screeched, and cars honked. Headlights exploded into a blinding glare, and sound merged into a cacophony. His thoughts spun and twisted, gnarled into incomprehensibility by screaming pain—pain that stole his breath and blanked his mind.
Pain that plunged his world into blackness.

~*~
A pinprick of light pierced the darkness before expanding into a vague halo. Above it, a face appeared, its features blurry. “Sir? Sir? Can you feel my hand?”

Hand? Where? He hurt. Everywhere.

Movement swirled like a giddy pirouette as huge, blocky shapes gathered around him. The voice that had spoken to him now seemed directed to others. “On my count. Three, two, one.”

The sudden motion wrenched such sharp pain through him that he would have curled into a fetal ball if he could move. The jolt smoothed into a forward motion, and the darkness of the night overhead gave way to the sleek interior of an ambulance.

The scream of the siren sounded distant, but unshakable, like a recurring nightmare. The young man who had spoken to Nicholas squatted by him as the vehicle lurched to a start. “Take it easy; we’ve got you now. We’re on the way to the ER. Your driver’s license has a Manhattan address. Do you have family or friends in Westchester? Anybody you want us to notify?”

Nicholas’s tongue felt like a block of lead, but he rasped out his father’s phone number. The effort sapped the remnants of his strength. Voices and conversations around him melded into a tangle of sounds, and when blackness drew like a veil over his eyes, he let go and let himself fall into a void.

The first thing that penetrated Nicholas’s unconscious haze was the familiar stink of powerful antiseptic cleaners. The bright, unrelenting lights blazing through his closed eyelids were next. They twisted and turned his splitting headache through a psychedelic hell.

He dragged his eyes open and waited until his wavering vision anchored around a young woman in green scrubs. She looked up with a smile. “I’m Dr. Larson. You’re at the Westchester Medical Center ER. How are you feeling?”

His eyes—the only part of him that could move—flicked across the room. Slowly, sensations that weren’t shards of pain dribbled in. The stiff coolness of the sheets against the bare skin of his legs. The absence of pain or of any kind of sensation in his back. He stiffened, alarm widening his eyes.
The doctor must have seen his reaction. “We gave you local anesthesia.”

“My back?” His voice was rougher than sandpaper.

“The orthopedic surgeon came by to evaluate you while you were unconscious. Based on the X-rays, he doesn’t think you’ll need surgery. Luckily, you’ve come through without any broken bones, but the severe muscle tears will take almost as long to heal.”

She nodded. “There are abrasions on your arms and legs, but they’re minor, relatively speaking. You had a concussion, but your helmet protected you from the worst of the impact.”

“Not for a while.” Her tone was kind but brisk. “Your parents are filling out the paperwork right now; we’re keeping you overnight. In fact, you’ll likely be here for a few days. Dr. Carter or one of the folks over at orthopedics will come up with a treatment plan for you, which will probably include physical therapy and chiropractor sessions.”

“Eventually, yes, but I’d recommend a wheelchair for a few days, and have someone push you around, or you’ll strain your back muscles further by moving yourself around.”
Can I dance?

The question stuck in his throat, unvoiced.

He didn’t dare ask it.