First Chapter Spotlight: So Unlike Me by Nikki Lynn Barrett 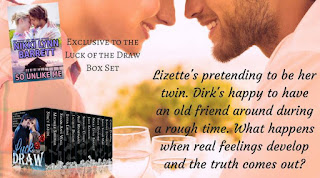 A new, fun themed boxed set is coming May 11th! Luck of the Draw is full of luck and wins! From sweepstakes to lottery to gambling, everyone wins some!

Today, I'm featuring the first chapter from one of the books in the set. So Unlike Me by USA Today Bestselling Author Nikki Lynn Barrett is a fun and emotional story about twins switching places, and the childhood best friend of one twin getting caught in the middle of the whole thing.....


So, here's Chapter One of So Unlike Me!


“You signed me up for what?”  Lizette Monroe pinned her twin sister Nola with a furious, deadly look

“I didn't sign you up. I signed me up, and now I've chickened out. Why not switch with me?”

“Why not-” Lizette sputtered. “For one, I have tons of things I could be doing. Two, we're way too old to be pulling the twin switch. Three, you and your damn sweepstakes! Four-”

“Okay, okay. You don't need to list everything.” Nola's voice quieted to a low mutter. “It would be good for you. You know, get away from the press over Chip's-”

“Don't speak that name,” she seethed. Lizette's ex-fiancé was a hot topic lately, especially in the last few months when he threw her life in complete and utter uproar.  A breakup was bad enough. He had to add public humiliation, lies, and slander to the list. Because Lizette and Nola were well known heiresses, of course the break up was in the spotlight. The unwanted attention forced her to keep her head low to figure things out. It came out of nowhere. One day, she'd been contemplating wedding things, wondering when Chip would commit to a date. He wanted it sooner, and didn't like the idea that he had to sign a prenup, forced upon Lizette by her parents' will. It made her question his motives, because if he'd loved her for the person she was and not what she represented, wouldn't he have been okay with it?

Why did things have to become so complicated?

That and Chip pulled it off on national TV.  Some stupid reality dating show, Rebound, if she recalled correctly, where they go on and talk about all the things their exes did to hurt them. Then all season, the hosts would help them find a rebound date.

Can we say train wreck?

But back to her sister and the crazy twin switch idea. “Nola...”

“Come on, Lizette! You know I enter all of these things. The last thing I expected was to win. I was going to try, I really was.” Her twin trailed behind her when Lizette strode off to the kitchen, eager for a cup of coffee to process the whole thing. “This is perfect. It gets you out of here for a while, and you can play as me. Enjoy yourself.”

“Enjoy myself. Right,” Lizette muttered, mulling over the idea. Damn it, she didn't want to admit quite yet that her sister had a decent idea. Getting out of California could be exactly the cure she needed.

“I am right! You've been avoiding everyone and everything! Get out there and live again. Throw your happiness up in Chip's face! You know it'll only be a matter of time before the Rebound crew comes looking for you to find out your side. They''ll ask you to face Chip and what he says,
especially when he has his rebound date. You know how that show goes.”

“I don't, actually. I'm not the one who sits around the house watching stupid reality TV and entering sweepstakes.” At Nola's surprised gaze, Lizette clamped her lips shut.

“I'm sorry, Nola. My mouth got ahead of me.” Nola had become agoraphobic over the past year and a half, and nothing Lizette said or did helped so far. Her sister was so embarrassed by this that she'd begged Lizette to go out in her place if Nola was to appear anywhere. No one aside from the two of them and their late father's right hand man, Travis, knew the truth about Nola.  “If I did this, what would you do for a week?”

“I have Travis. He comes by and helps,” Nola replied. “I didn't expect to win.”

Yeah, she said that already.

“Where's the vacation location?” Lizette treaded carefully. Nola would find any way she could to con her into saying yes, even when Lizette wasn't certain about any of this.

A twinkle lit up her twin's eyes. “Get this. Paris!”

“Seriously?” She whistled. Okay, this might be worth considering.

“We've got our passports already!”

Reality hit her hard in the gut.“Yeah, but taking your place going somewhere international is not the smartest move.”

“Well, don't get arrested, killed, or kidnapped. Simple.” Nola chuckled, crossing her arms.
“Be serious! You know how much trouble we could get into?”

“A week in Paris. A week away from the media. A-” Oh, she planned to lay it on thick. Damn her!

“Nola!” Lizette cut her off. Her sister could be so reckless at times.

“It would be such a shame to let it go to waste,” Nola tsked.  “All they'll do is check your- my passport. We've both got a clean record. Nothing could go wrong. I'll try when something is a little closer to home.”

Lizette sighed. How did her sister always manage to get into these situations? But damn it, Paris was tempting! And she could post photos all over her social media accounts and make Chip jealous.

Strike that, no she couldn't. Not as Nola. Okay, so that part was out, but Paris? Turning that trip down would be a mistake.

How am I seriously even considering this crazy scheme?

“So people actually entered the sweepstakes, huh?   You think twenty winners are going to be satisfied by coming here?” Dirk Ramsey folded his large frame onto the chair across the table from his uncle Max. Dirk had actually helped sponsor the sweepstakes, not because he thought it would pan out, but because his uncle was the only good family member he had left, and the soft-hearted guy he was couldn't say no when Uncle Max's desperation put his health in jeopardy. Instead of taking the offer to help with storm damages, Uncle Max had this insane idea about a sweepstakes to bring in out of towners, showing them the best of the town during an annual event.

“Last ditch effort.” His uncle, the mayor of Paris, Tennessee, gritted his teeth. “I need something to put this town on the map.”

“Discover a singer and keep 'em away from Nashville.” Dirk chuckled, warranting a warning glare from his uncle.

“You aren't very funny, kid.  We've got the Fish Fry coming up. Why not introduce new people to our town? Sure, they may go visit Nashville's highlights, but they're staying here. In our inn. It's all about the local attractions. The flood didn't help our situation any.” Max eyed him warily. “I thought you were on board with this. If you didn't believe in it...”

“I think you could have found a different way about it, but you know damn well I'm on board.” Dirk sat up straight. “All right. You tell me what you need, and I'll help. After this though, I'm gonna have to go home.”

His uncle nodded. “I know. I can't keep ya here forever. I appreciate all the help you've given me the last few months. This time, I promise to take it easy. Your cousin Arthur can't be bothered to help. His mother says he keeps getting into trouble, but he doesn't want to talk to me about it.”

“You'd better. I don't want to hear in the middle of the night that my only family had a heart attack due to stress. Let's just hope this works.” Dirk shifted positions again.

“We've got a good lineup this year for singers, too. Some well known, some not. If it fails, we know not to do a sweepstakes. Is Maria waiting for you at home? How come she hasn't come to visit?”

“Because when she realized I wasn't coming back right away, she left me,” Dirk replied, thinking of the woman he'd almost proposed to. Go figure. When he put his heart out on the line, he got the raw end of the deal. It had taken a long time to decide, and he wondered now if he'd only thought about proposing because he'd been comfortable with her. When it came down to it, Dirk didn't love her the way he thought he should. That was almost a month ago, and he'd been quiet about it. He wasn't about to lie to his uncle, even though Max would feel guilty for keeping Dirk away from home and his life for so long.

Just as he suspected, his uncle's face fell. “Sorry about that, Dirk.”

“It's her loss.” Her loss, and his realization that it was better this way. Being comfortable with a woman wasn't enough to last a lifetime.

“Yes it is, but I know how you felt about her.”

“Yeah, well...” Dirk shrugged. Time to change the subject. “Which artists have you lined up that are noteworthy?”

“Try Kyra Sanders for our country act, and rock band Zinger.” Max pumped a fist in the air. “Think they're big enough to draw a crowd?”

Dirk whistled. “Impressive. Both acts have a huge following, and I love the diversity in music.”

“Never said you couldn't, old man, but I bet I could still kick your butt in a good old-fashioned game of bowling.”

“Is that a challenge, boy? Because if that's the case, game on!”

“Hey, how soon until the sweepstakes winners get here, anyway?”

“A week.” The look of panic reappeared on Uncle Max's face. As suspected, he wasn't fully ready. Or maybe he was, and just had a case of perfectionism.

Damn. Not a lot of time. “Is the inn okay after that last storm?” Too many deadly and costly storms rolled through here recently, leaving Paris and surrounding communities on high alert.

“Just about. I have a small list of things needing to be done before they get here. You win bowling tonight, and I won't ask anymore of you. You lose, and the list is yours. Feeling the pressure?” Uncle Max let out a wicked cackle.

“I always feel the pressure. You know what would be hilarious? What if someone didn't read the fine print on the sweepstakes and thought they were going to Paris, France?” Dirk laughed at the image flashing in his mind of an angry person discovering how far off the mark they were. He wasn't one to mock people, but if someone didn't read all of the details, that was on them.

Paris, Tennessee was a far cry from Paris, France. Despite how much  effort and money he'd invested into this whole plan, Dirk wasn't convinced it would turn out as well as Uncle Max hoped it would.


Stay tuned for more first chapter spotlights from the Luck Of the Draw set! 99 cents, or FREE in Kindle Unlimited. All stories are new and exclusive to the set.