Tell me about yourself, and your writing.
Hi! I live in Western Canada with my husband and my dog Lou, a Pug/Terrier cross who rules our lives way more than she should. I’ve been reading since I figured out who Dick, Jane and Sally were, and I’ve been making up stories in my head for as long as I can remember. But it took me a while before I felt confident enough to put those stories down on paper.

How long have you been writing? How many published books do you have, and what genres?
I’ve been writing for about 20 years, although I didn’t become published in novel length fiction until 2007. I guess you could say I had a very long apprenticeship in writing.
In January 2014, when ALWAYS A BRIDESMAID is published, the third book in my Left at the Altar series, I will have ten published works. I write in the romance. I love adding humor to my books whenever it’s appropriate, as well as a touch of the paranormal.

Do you write in multiple genres or just one? If just one, do you ever consider straying outside your genre?
All my books are romance, but I write in several sub-genres of romance including contemporary, historical (set in WW2), romantic suspense, and paranormal. I guess you could call my paranormals ‘paranormal light’. My paranormal romantic suspense, SEEING THINGS, features a heroine with psychic abilities. BURNING LOVE, is about a couple of match-making angels who constantly get themselves into trouble as they match a firefighter with a girl prone to setting cooking fires. I can’t seem to write about angels without using humor!
If I was ever to stray from the romance genre, it would be to write a mystery series. I love cozy mysteries with a continuing sleuth and an interesting group of secondary characters. But I’d have to give my sleuth a love interest because that’s the kind of writer I am!

Are you a plotter or do you write from the seat of your pants?
Mostly I’m a plotter. Nothing scares me more than a blank screen and a blinking cursor! I need at least a vague road map so I have a clue where I’m going. In addition to doing some kind of outline, I also fill out character sketches so I can figure out who my main characters are and what motivates them. I like to know not only what they look like, but what happened in their pasts, and what they want for their futures.

What is a typical writing day like for you?
Typical? What’s typical? It usually goes something like this on a day I’m not at my part-time day job: wake up around 7 am, shower, eat breakfast, take dog for walk, sit down at computer to check email and Facebook. Whoops, I mean, to write. Okay, there may be some Internet browsing going on. Eventually I will write. Until I get hungry. Or I have to put a load of laundry in the dryer. Or the dog needs to go out. Sometimes it’s hard to keep my butt in the writing chair, but the main thing is I keep coming back.

Who do you love to read? Favorite authors, favorite books?
I enjoy Nora Roberts, Suzanne Brockmann, and Mary Balogh among others. I just read Lisa Kleypas’ book SMOOTH TALKING STRANGER and really enjoyed it, so I’ll be sure to look for more from her. One of my favorite series is Nora Robert’s Chesapeake Bay series – SEASWEPT, RISING TIDES, and INNER HARBOR. They’re stories about redemption and second chances, and confirm that no child is ever beyond hope if he receives the love and care he needs.

What is something you'd like to accomplish in your writing career next year?
At the moment I’m putting together a proposal to write a couple more books set in Paradise, North Dakota, the setting of FIRST AND AGAIN. I’m hoping my editor likes my ideas and I can return to my fictional small town. I’m also working on another series about a man who can only gain access to Heaven by taking three mortals back in time and giving them a second chance at love. I’m calling it my Twice in a Lifetime series.

If you could have one paranormal ability, what would it be?
If I had a paranormal ability, it would be to eat all the potato chips and Doritos I want and not gain weight. Seriously, I’ve thought about being able to read people’s minds or predict the future, but I’m not sure I’d want to know other people’s thoughts; what if they don’t like me? I’m not sure it would be a gift to know what happens before it happens. But one ability I think would be totally cool is time travel. I’d especially love to witness interesting events from the past. Wouldn’t it be cool to go back to 1969 and attend Woodstock?

If you could keep a mythical/ paranormal creature as a pet, what would you have?
Well, I’m more of a dog person, but it might be fun to have a pet dragon. As long as he’s not too big, and he’s got that fire-breathing thing under control. At least he wouldn’t shed!

Tell us a little about your latest release.
FIRST AND AGAIN is a small town romance about second chances, trust, and learning where we belong. Here’s a blurb:
Bridget Grant is back in Paradise. Paradise, North Dakota, that is.
She’s swallowed her pride and moved back to her hometown with her daughter after her divorce and the loss of her catering company. Now she’s trying to navigate the strained relationships she’d left behind – including her first love, Jack Davison.
Jack never forgot Bridget, or the day she left town – and him. When Bridget caters a lunch at Jack’s tourist ranch, old flames reignite. They have more in common than ever – Jack’s also a single parent. Though they both try to keep things casual, Bridget, Jack and their girls are starting to look a lot like a family.
But Bridget’s only planning to stay in Paradise until she’s saved enough to relaunch her business. Jack’s invested too much in his ranch to leave. And with their daughters involved both have a lot more at stake than heartbreak. How can they risk falling in love?

What is something that you absolutely can't live without? (Other than family members)
Coffee. And possibly a good Internet connection.

If you could spend a day with anyone from history, dead or alive, who would it be, and what would you do? What would you ask them?
I would love to spend a day with Jane Austen. I’d like to see the desk where she wrote and the pen and ink she used, and hear her talk about her writing process. I’d love to go on a long walk in the English countryside with her, and listen to her thoughts about writing, and her books, and maybe her ideas for books she never had a chance to write.

What are some of your other hobbies outside of writing?
I like gardening, going to movies and concerts (not sure that’s a hobby, but I’m going with it), and yoga. And reading, of course!

If you were on the staff to have a book adapted to movie, what would you pick?
I think THE DEFIANT HERO by Suzanne Brockmann would make a great movie. It has a lot of action, with heroine’s daughter and grandmother being kidnapped by terrorists. The kidnapping/terrorist plot is interwoven with the World War Two story the grandmother tells to the little girl and the terrorist who is supposed to be guarding them. Both stories are very visual. And of course there’s a great love story. Two love stories, actually. The grandmother tells the story of the love of her life.

What is a talent you wish you had, but don't?
I wish I could play a musical instrument, like piano or guitar. I would also love to be able to speak several different languages.

Favorite color?
Today it’s blue. Tomorrow it could be yellow. It depends.

Weather: Hot or cold?
How about in-between? I hate being too hot or too cold, so warm suits me best. It’s the reason I like spring and fall the best.

Favorite place to read?
In bed.

Favorite meal
I’d have to go with lasagna.

If you could travel anywhere and do anything, no limits or money holding you back, where would you go?
If it was safe to go to the Middle East, I would love to see the pyramids in Egypt, the Wailing Wall in Israel, the ruins of Carthage in Turkey. There is so much history there that I’d love to see. 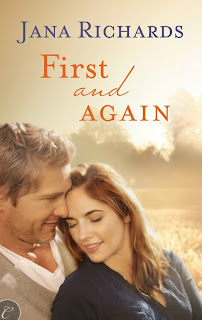 Bridget Grant is back in Paradise. Paradise, North Dakota, that is.

She's swallowed her pride and moved back to her hometown with her daughter after her divorce and the loss of her catering company. Now she's trying to navigate the strained relationships she'd left behind—including her first love, Jack Davison.

Jack never forgot Bridget, or the day she left town—and him. When Bridget caters a lunch at Jack's tourist ranch, old flames reignite. They have more in common than ever—Jack's also a single parent. Though they both try to keep things casual, Bridget, Jack and their girls are starting to look a lot like a family.

But Bridget's only planning to stay in Paradise until she's saved enough to relaunch her business. Jack's invested too much in his ranch to leave. And with their daughters involved, both have a lot more at stake than heartbreak. How can they risk falling in love?

When Jana Richards read her first romance novel, she immediately knew two things: she had to commit the stories running through her head to paper, and they had to end with a happily ever after. She also knew she’d found what she was meant to do. Since then she’s never met a romance genre she didn’t like. She writes contemporary romance, romantic suspense, and historical romance set in World War Two, in lengths ranging from short story to full length novel. Just for fun, she throws in generous helpings of humor, and the occasional dash of the paranormal. Her paranormal romantic suspense “Seeing Things” was a 2008 EPPIE finalist.

In her life away from writing, Jana is an accountant/admin assistant, a mother to two grown daughters, and a wife to her husband Warren. She enjoys golf, yoga, movies, concerts, travel and reading, not necessarily in that order. She and her husband live in Winnipeg with their Pug/Terrier cross Lou and several unnamed goldfish. She loves to hear from readers and can be reached through her website at www.janarichards.com


a Rafflecopter giveaway
Posted by Nikki at 2:00 AM