Thanks so much for having me here today. I’m excited and nervous about my first ever self-published release. But this story is special. 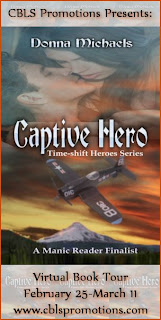 Several years ago, I started writing CAPTIVE HERO as a submission to HQN Blaze, of all things. I'd heard they were entertaining the idea of acquiring time-shift novels. But, then I snagged a pitch meeting with Kate Duffy from Kensington at RT Pittsburg, so I changed the story to a novella. She requested the full, but bless her, she died unexpectedly before giving me a yes or no. I didn't have the heart to do anything with it for awhile, so it sat on my hard drive until this summer after I talked to Sky Purington about self-publishing. I dusted it off, lengthened (it's now 346 print pages), changed the ending to what I wanted and viola--Captive Hero (Book One in my Time-shift Heroes Series) was done.
I'm trying to swim with the big fishes here. CH isn't exactly your cookie cutter book. I didn't have to conform the story so it's a little different than anything else I have published. It’s hotter, sexier, and…well, different. I'm really excited and scared about it. Hoping it's well received. I paid an editor to go through it (thrilled to find Stacy D. Holmes freelanced) and she loved it. A lot. So, that made me feel a little easier about going out-side the box on this one. 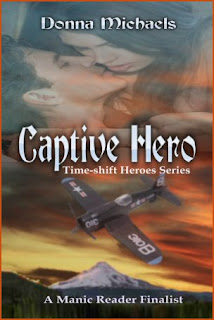 When Marine Corps test pilot, Captain Samantha Sheppard accidentally flies back in time and inadvertently saves the life of a WWII VMF Black Sheep pilot, she changes history and makes a crack decision to abduct him back to the present. With the timeline in jeopardy, she hides the handsome pilot at her secluded cabin in the Colorado wilderness.
But convincing her sexy, stubborn captive that he is now in another century proves harder than she anticipated—and soon it becomes difficult to tell who is captor and who is captive when the more he learns about the future, the more Sam discovers about the past, and the soul-deep connection between them.
As their flames of desire burn into overdrive, her flying Ace makes a historical discovery that threatens her family’s very existence. Sam’s fears are taken to new heights when she realizes the only way to fix the time-line is to sacrifice her captive hero...or is it?
Can love truly survive the test of time?

Warning: This title is intended for readers over the age of 18 as it contains adult situations and language and may be considered offensive to some readers. 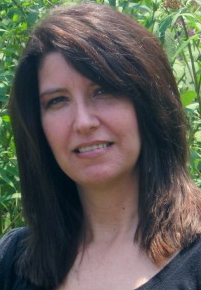