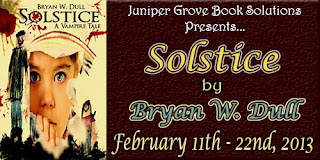 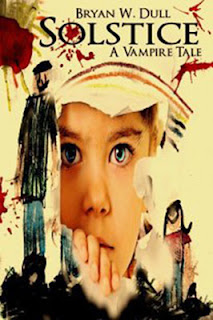 Synopsis:
In Gavin Moxley's world, there is no thin line between right and wrong. In a personal crusade to help sever a line of disease carried by a clan of vampires; Gavin has no choice to be ruthless. The Vampires are purposely infecting the human population…waiting for humans to actively pass it on to each other. Gavin takes no chances and executes them one by one. Not strong or powerful, finding humans before they turn into full vampires is ideal and Gavin’s best bet.

Yes, this is Gavin’s life…

…And nothing ever changes it until a young half breed vampire with special abilities, Solstice, attaches and makes herself a fixture in his life when she asks for his help and protection and when a reluctant Gavin agrees he joins a dangerous game of cat and mouse. There is no safe place and the pair are constantly watching their backs. Torn between his hate and his love for Solstice Gavin is thrown into a moral dilemma that only he can figure out but two things are clear…

His faith and Humanity are being tested and the past is not always forgotten.

Excerpt:
“You are going to be part of a very special science project,” he hissed. The woman continued to fondle for her little bat. “I don’t want you to think it was anything personal, but I need your child,” he continued. She quietly yelped at the thought of what this monster wanted with an unborn child. She wanted to say something. She wanted to plead with him and ask him to leave her alone, but she couldn’t…his teeth were already in her neck. She felt the quick but seductive bite but still managed to pull out her bat and with all of her might she struck the bat upon his head and broke it in half. This got his attention, enough to get him away from her neck.

She knew what kind a creature this man was. After all the stories and all the tainted beliefs, she finally realized that her parents were wrong and there was such a thing as monsters. All of the monsters she thought that were under her bed and hiding in her closet when she was younger was just a dream in comparison to what she is witnessing now. However, she couldn’t think about that, she had seen enough movies and read enough books to know what this mysterious, sickly man in black was…A vampire.

She turned around in her seat with blood trickling down her body and started to stab the monster in the chest with the broken bat. Trying to reach any heart she could find in the evil being. He was laughing at her, telling her that it tickled and how she was wasting her time. He was pushing her harder, and when she couldn’t stab harder she grabbed her side in pain. The vampire in black composed himself and asked, “When exactly did I lose your trust?” He was mocking her and laughing at his own wit. She writhed in pain. He opened the car door on the other side of her and floated slowly out of it. She reached for him, hoping that there was a glimmer of good in him and that he would help her. His eyes turned kind for a minute.

“I am sorry,” he said to her, “I can’t help you now.” Then in a comedic gesture he continued, “But I can help you help yourself!” He reached into her bag, grabbed her cell phone, and placed it inside her hand. “He guided her pointer finger to the “9” on her phone and then to the “1” and pressed it twice. His cold finger was over hers like a person would help a blind person. “There,” he exclaimed,” you should get some help soon, but it may take a while for them to find you.” Our lady in distress thought to herself, “Why?” The creature in black looked down his long nose at her and said, “That’s easy, you can’t talk to tell them where you are.” He was right; the punctures in her neck were so bad that she could not form any words. 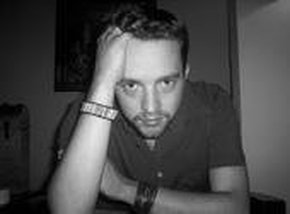 About the Author:
Currently living in Cincinnati, OH with his wife and daughter, Bryan W. Dull goes leaps and bounds to get away from the norm and be his own person; with himself and his writing. Since middle school he has always known what he was good at; entertaining and telling stories. He has been consistently writing and coming up with plots for the last twenty years, but just recently decided to share one with the world. His first novel, “Solstice” is a vampire book inspired by his daughter and noir literature. Born in Anderson, IN, Bryan has also lived in Ohio, Florida, North Carolina and South Carolina (where “Solstice” is based).

Being a lover of all things art and pop culture “nerdism”; his interests lie in film, television, comics, games, anime, and books. For a short while, Bryan dabbled in voice acting work only to shift his focus to his family and writing. His favorite authors include; Chuck Palahniuk, Robert Kirkman, Clive Barker, Ernest Cline, and Neil Gaiman.

Giveaway Details:
There is a tour wide giveaway (International). Prizes include:

a Rafflecopter giveaway
Posted by Nikki at 12:00 AM