Hi, welcome back to my blog! Today, I'm turning it over to author Alana Lorens, with a guest post about her newest book. I hope you enjoy!

Thank you, Nikki, for having me visit your blog today!
Of all the stories I’ve written, CONVICTION OF THE HEART, which comes out from The Wild Rose Press on June 8, 2012, is the one that’s the closest to my own life. In one way, that makes it really comfortable, because I know I can convey those feelings of inadequacy that one has as a single mother, as well as the desperation I sometimes feel, trying to help some of my family law clients with their cases.
On the other hand, it’s also a little uncomfortable, because it exposes some of the vulnerabilities I’ve experienced in my life as well. For a long time, I raised my girls alone (even though I’m married now), and it wasn’t always an easy time. One of them brought home pinkeye, and I got it so badly that I had to cancel my court hearings for a week. As a self-employed mom, there were weeks where we ate tuna and macaroni and cheese, despite the fact that my role models on TV ate caviar and drank champagne. I had to manage my business and still make sure that my girls had a reasonable normal life—perhaps they had a few more responsibilities than their classmates, but I tried very hard to limit this. They deserved a real childhood.
As for the dangers that face my novel’s heroine and her children, I was always worried that someone would take out their frustration with their spouse or the court system on my kids. It seems a fair trade, you know? You’re messing with my family, so I’ll mess with yours… Fortunately we never had anything nearly as vicious as what Suzanne, Hope and Riviera experience. And for this, I’ve been very grateful. 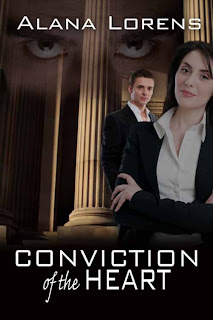 DUAL BOOK/BLOG TOUR!!
CONVICTION OF THE HEART (release date June 8, 2012)
And SECOND CHANCES (release date July 2012)
The first and Second books of the Pittsburgh Lady Lawyer Series!
Come by the following blogs or live booksignings and leave a comment to be entered in a drawing—at the end of the tour, Alana will give away one ebook copy of each book and one paperback copy of each book—Four lucky winners!  See all the stops at http://alanalorens.com !
BLURB:
Family law attorney Suzanne Taylor understands her clients’ problems—her own husband left her with two babies to raise alone. Now that they’re teenagers, her life is full. The last thing she wants is the romantic attentions of a police lieutenant, no matter how good-looking.

Lt. Nick Sansone is juggling the demands of a new promotion, and doesn’t need complications either. But when he sends a councilman’s battered wife to Suzanne for help, he realizes he wants to connect with the lovely, prickly lawyer on more than a professional level.

They are soon confronted with a different battle, when the abused woman's husband threatens retribution. The powerful, well-connected councilman can damage both their careers—not to mention hurt those they love. Can they bend enough to admit they need each other in a time of crisis? Or will a husband’s revenge take them down before they ever get a chance? 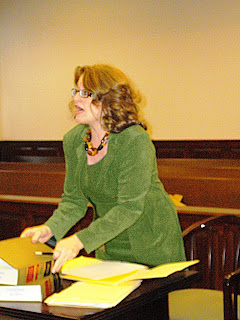 EXCERPT:
After the holidays, the children returned to school as if their lives hadn’t been turned upside down. While Suzanne was preparing red beans and rice for the family dinner one evening the first week of January, Hope brought her a plain white envelope with no return address, just a carefully-inked “Attorney Taylor” on the front.
“I almost forgot to give this to you. Some guy gave it to me in the parking lot at school. Said he was one of your clients, and he didn’t have time to get to your office today.”
“Really? Thanks, honey.” Hope headed upstairs to her homework, and Suzanne just studied the envelope. Odd. She couldn’t remember ever getting something via her kids before. And who would know she had a child at the high school?
She knew who.
Better see what’s inside.
She gingerly opened the envelope and drew out the dog-eared piece of notebook paper inside. At the top of the paper was a blotch of red, inartfully drawn to represent a bloodstain.  The writing underneath was bold, black, and terrifying.
I’ve been busy, bitch, but I haven’t forgotten about you. I can get this close to your children. If you love them, you’d better leave my children alone!
The words echoed in her head like a chanting locomotive, speeding faster along its inevitable track. Close to your children, close to your children, close to your children.
Her heart racing, she set the paper and envelope on the counter, jerking her hand back like they had been a pair of cobras. Several people might have held these sentiments—Jack Wachowski, who’d confronted her on the courthouse steps, several others in various stages of family disintegration. No clue in the writing or the words who might have done this, but gut instinct gave her a prime suspect. Gregory Morgan.
The threat was beginning to sink in. She felt vulnerable. Despite her income, she hadn’t put the children in private school or taken any special precautions, wanting them to grow up as normal as possible. Even after what had happened to Riviera. If nothing else, this example demonstrated to her that she couldn't possibly protect them every day, everywhere. They were at risk. What if the man had handed Hope an envelope full of anthrax instead of paper? What if he’d had a knife instead of the envelope?
Buy link: http://www.thewildrosepress.com/index.php?main_page=product_info&cPath=195&products_id=4877

BIO:  Alana Lorens (aka Barbara Mountjoy) has been a published writer for over 35 years, including seven years as a reporter and editor at the South Dade News Leader in Homestead, Florida. Her list of publications includes the non-fiction book 101 Little Instructions for Surviving Your Divorce, published by Impact Publishers in 1999, stories in A Cup of Comfort for Divorced Women, in December 2008, and A Cup of Comfort for Adoptive Parents, in June 2009. Her Clan Elves of the Bitterroot series (as Lyndi Alexander) is available from Dragonfly Publishing; THE ELF QUEEN in 2010, THE ELF CHILD in 2011, and THE ELF MAGE in 2012.
Her newest release (as Alana Lorens) is SECRETS IN THE SAND, in the Crimson Rose line from The Wild Rose Press. CONVICTION OF THE HEART is her sixth published novel, which will be followed in July 2012 with SECOND CHANCES, a women’s fiction with romantic elements story. The Wild Rose Press is also publishing her contemporary romance novella THAT GIRL’S THE ONE I LOVE later this summer.
When she’s not busy writing, practicing law or teaching, she takes care of a husband and a bunch of kids and blogs on a variety of subjects, including autism, science fiction and life at Awalkabout.