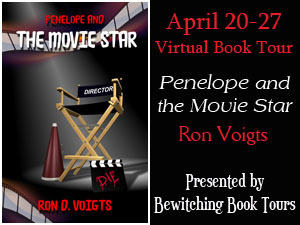 PENELOPE AND THE MOVIE STAR
By Ron D Voigts
Age Level: Mid Grade (tween)
Blurb
Marvel Movies comes to Tiffin Preparatory School to shoot a motion picture against the backdrop of the old Windorf Hotel that now houses the school. Penelope sneaks onto the set and watches them film a scene. Famous actors Priscilla Young and Clarence Dodd star in the movie and Penelope gets to see them up close. Regrettably, she also sees a spotlight fall on the director and kill him. Penelope claims she had her eyes shut when it happened, but the police think she may remember something. Unfortunately for her, the killer also thinks she may recall something.

To complicate matters, the school has a new cook, and Penelope’s friend Raddy thinks Chef Judy is trying to poison them. The new girl at school steals away everyone’s friends. As always Principal Merriweather keeps finding new ways to expel her. Between trying to get her friends back, starving and keeping away from the killer, she has her hands full in this next Penelope Mystery. 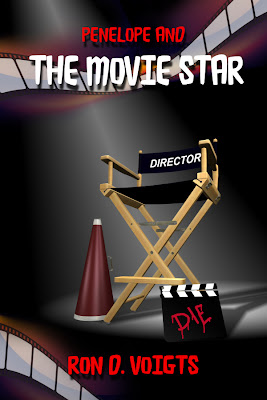 Excerpt
She wanted to explain that Chef Johnny was actually Uncle Elmer, her father’s brother. Uncle Elmer had a run-in with the mob a while back and entered the witness protection program with a new name. No one was supposed to know. When he showed up as the new chef during the first semester, Penelope recognized him even in his disguise. Her uncle made her promise not to tell anyone, and she kept her word, not even telling her parents.
“The man serving the ice cream looks familiar,” Father said. “The receding chin, beady eyes and high forehead remind me of someone I know. But who?”
“He’s Johnny, the school chef,” Penelope said.
“My gosh! Take away the mustache and hair, and he could be a dead ringer for my brother Elmer.”
Uncle Elmer, who had been scooping ice cream into dishes, spotted Penelope. “Hey, kiddo!” Seeing his brother Gustaf, Uncle Elmer’s eyes swelled to the size of hundred watt light bulbs. “And you must be Penelope’s father.” He began winking frantically.
“What’s wrong with your eye?” Father said.
“Johnny has a nervous twitch,” Penelope said, making up something.
“Yeah, a twitch.” Uncle Elmer began to exaggerate his winking that turned more into a spastic facial grimace.
Father stared and stroked his mustache. “Good grief! I can’t believe it.”
Uncle Elmer stopped twitching. Penelope felt a tug at her insides, hoping that Father wouldn’t do anything to blow his cover.
Then Father added, “You sound like my brother Elmer, too.”
Uncle Elmer leaned closer and lifted the edge of his toupee to show it was part of his disguise. “I am your brother.”
For a moment Father looked stunned. He opened his arms ready to hug his brother. “Elmer, I can’t believe it’s you.”
“Quiet.” Penelope touched a finger to her lips. “We can’t say his name out loud like that. He’s still in the witness protection program.”
“Ah, I get it.” Father held up a finger to mark the eureka moment. “We are complete strangers who have never met before. I’m pleased to meet you,” Father held out his hand, “Elmer.”
“Johnny,” Uncle Elmer said. “Call me Johnny.”

Biography
Ron D. Voigts lives in Raleigh, NC and sometimes somewhere else. When back in Raleigh, he enjoys time with his family, watches old movies and shoots lots of pool. He has his own private writer's retreat in La Vale, MD where he spends lots of time working on his next novel while enjoying the mountains and eating ice cream. 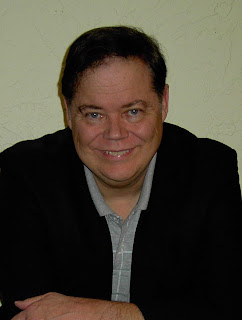 
Penelope and The Birthday Curse http://www.amazon.com/dp/B005561FZI

Penelope and The Ghost's Treasure http://www.amazon.com/dp/B005P94IGI

Penelope and The Movie Star http://www.amazon.com/dp/B0077UX7LU