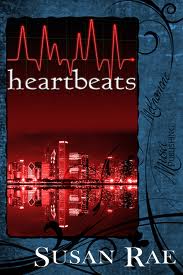 BLURB: Dr. Elizabeth Iverson’s career is on track. She’s just landed the enviable position as lead cardiologist at a prestigious Chicago heartcare center working under a renowned cardiovascular surgeon. But her plans for a quiet, controlled life are shattered when she discovers her college roommate murdered in her apartment. When her former lover, FBI Special Agent Drake McGuire, shows up on her doorstep with the cops, he unleashes a storm in her heart that further threatens to destroy her world, especially when he insists on hanging around to help solve the case when it becomes apparent that Elizabeth was the intended target for murder!

REVIEW:
Dr. Elizabeth Iverson loves her job and her little girl. Working at the heart care center has provided her with a good steady income and a life she never thought would have happened. Everything changes though when she finds two things that will rock her world. First is finding her best friend killed and a man from her past who just came into her life with his sexy body and smile. Elizabeth never expected to see Drake McGuire ever again yet she knew it was bound to happen. Seeing him again after all these years still proves to her that he will always be the love of her life. She knows now is not the time to dwell on the past for someone wants her dead. Elizabeth’s main goal is to catch the killer even it means putting herself as bait. Can she go through heartbreak from Drake before the killer catches her?

Special FBI Agent Drake McGuire loves the adrenaline of his job and the action but lately he has been feeling down. He knows the only way to get rid of his funk is if he sees her. It’s been years but he cannot forget about Dr. Elizabeth Iverson. The woman not only got under his skin but somehow is the only one to really know Drake. He never expected though to meet her during a murder. Someone wants his woman dead and he’s determined to find the killer before they find her. Drake knows Elizabeth is hiding something from him and yet he is waiting patiently for her response. Can he find out all her secrets before it’s too late?

This is a first I have read from Susan Rae and have to say I was quite amazed by her talent and the suspense in the book. First of all Elizabeth and Drake are two people who need one another to complete each other. Elizabeth is always working and so is Drake but man when they come together watch out. Passion, romance and man tons of suspense in Elizabeth’s life rocks this book. I was like turning the page wanting to know who was after Elizabeth and man it will surprise you in the end. Heartbeats is definitely a book that is worth buying for it has everything a reader will want, romance, passion, suspense and two people finally getting their happily ever after.

Heartbeats on Barnes & Noble
Posted by Nikki at 9:20 PM