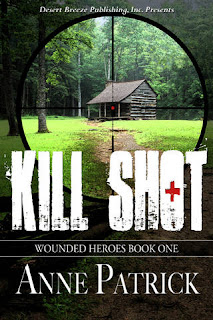 Blurb:  Former combat medic Kory Wagner has been in four war zones, served three tours in Iraq, survived countless firefights, RPG’s, IED’s and even a helicopter crash. Now she’s home and out of the Army for good and someone is trying to kill her in her own backyard. Just as disturbing is the handsome sheriff who’s on the case.
Sheriff Sean Harding doesn’t quite know what to think of the decorated veteran that managed to outsmart an entire search party. What bothers him more is the body of a PI, whom she hired, was found dead in a building she owns. And Kory isn’t being very cooperative with helping him find the answers as to why someone would kill her sister and want her dead. Will he be able to keep her alive along enough to discover the truth?
My Thoughts:   How does a woman who was a medic in the war go from as such to a civilian? Especially when an unknown enemy looms, keeping her life in danger?
Well, it's not easy.  Kory has so much to be thankful for now that she's returned, but she's also seen way too much heartache and loss, and she suffers a personal one as well, losing her sister to murder.  I took an instant liking to Kory. Her character was developed strongly and I admired her very much.
The book starts out with a bang. The action was intense from the beginning and never let up.  The hero, Sean, was a good match for Kory. He wanted to keep her safe, lover her, and make sure no harm came to this woman.
Kill Shot is a romantic suspense with a touch of faith. It's engaging,  entertaining, and has edge of your seat moments. Anne Patrick delivers a well crafted story that leaves the reader satisfied at the end, but a little sad because the story ended.  It's a book that I would recommend to anyone that enjoys romance, suspense, and a little bit of faith.
Anne's website:   http://www.annepatrick.weebly.com
You can find Kill Shot at Amazon and other ebook outlets
Until next time,
Storm Goddess
Posted by Nikki at 12:00 AM